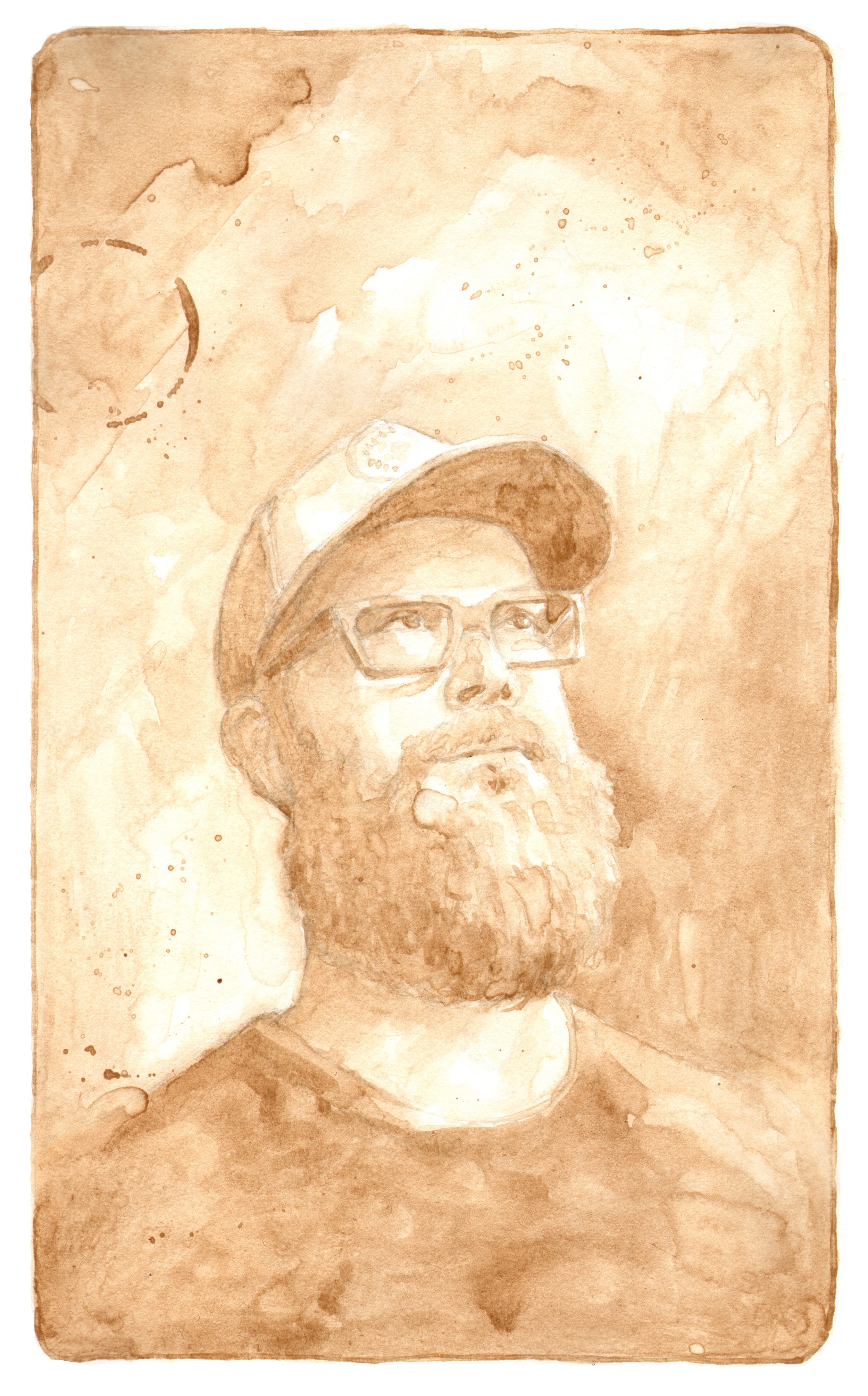 I met Lance Curran a few years ago at charity Drink and Draw sponsored by Arcade Brewing. I had seen him around at other beer events in Chicago but we hadn't been introduced yet. As we both ordered drinks at the bar he noticed I was wearing a craft beer shirt and we quickly struck up a conversation about local craft beer, comic books and tee shirts.

Lance is the co-owner of Arcade Brewing, a Chicago based brewery that is growing quickly into a big name with unique projects and beers. He is also the warehouse director and curator of comic book tees at Threadless, a massively popular custom tee shirt company that is known world wide for providing unique opportunities to many types of artists.

Lance took some time out his hectic schedule to pose for a beer portrait and answer a few questions.

KB: You’re the co-founder of Arcade Brewery, known not only for its interesting styles and flavors, but also the retro feel of its labels. What was the inspiration for the name and unique branding of the company?

LC: We really wanted a name that encompassed the idea of community in many ways. We thought of course of the modern and nostalgic idea of video game arcades but also the shopping arcades of ancient Greece. We wanted something that you would want to experience with friends and participate in.

KB: Arcade has teamed up with several professional comic book artists like Jill Thompson, Mike Norton and Tony Moore to create some memorable labels for your beers, like Armbar Amber Ale, Battle Pug Brown Ale, Festus Rotgut. How does that process work? Do you seek out the artists with a beer in mind or do they come to you?

LC: We usually seek them out but also sort of evolve after having conversations with comic creators and talent at different comic cons and other projects I'd had been working on. Beer just happens to come up a lot in conversation while also talking comics and art. Making an amber ale I immediately thought of Jill and her and Brian Azzarello were some of earliest taste testers for Arcade brews. With Battlepug I had been working with the Revival team on a print series for my Secret Panel project and he had mentioned always wanting to do a beer. I loved the idea of a Battlepug beer and it was our first official licensed property on beer. Mike is really into brown ales and we wanted the beer to match what he was thinking but also add our own Arcade touch. Festus Rotgut was our first 6 Pack Story which is a comic across 6 bottles of beer. This evolved while working with Tony Moore on another project and he loved the concept and brought in Jason Aaron. For 6 Pack Stories we let the comic come first and then brew a beer that we feel most enhances the experience and pairs best with it. We've also worked with Jimmy Palmiotti and Darwyn Cooke for our The Adventures of Dutch Courage 6 Pack Stories and just announced we'll be working with the Revival team of Tim Seeley and Mike Norton for our 3rd Volume of 6 Pack Stories with a story based off a Revival character. This year for C2E2 we partnered with Valiant Entertainment for an Archer & Armstrong beer and they even made a variant cover of the comic featuring our beer. That blew my mind.
We've also worked with comic artists such as Alexis Ziritt and Ryan Browne and have a beer coming out in May with Menton3.

KB: Arcade provides unique opportunities for artists through your art competitions. Talk a little bit about those competitions, and how they work.

LC: This evolved first form my partner Chris Tourre who had a project called Public Brew where he would do a residence at different art galleries in the city and invite the public to participate. At the time Chris and I were in a band together and I loved the community aspect of it and thought it would be rad to take things further and allow anyone anywhere to participate with aspects such as naming and designing the beer label. We still call these quarterly challenges Public Brew. We come up with a beer we are going to brew and then invite anyone online to help us name the beer. Winner gets a prize pack and then we move on to the design challenge. We post every submission on our instagram and then narrow it down to finalist that get voted on through Facebook. The winner gets $300 as well as their name and design on our label. These have been very popular and we are amazed at the submissions we get from all around the world.

KB: When you’re looking to try out a new beer, how much does the label or packaging affect your opinion on what to buy?

LC: It affects it very much. I'm drawn to art and packaging and there's so much good beer out there today that it's likely I'll pick up the beer that attracts my attention first.

KB: What’s next for Arcade?

LC: We are currently looking to expand our operations and open a unique taproom. We increased our capacity by 50% at the start of this year which has allowed us to shift into small format packaging such as 12oz 4 Packs and 6 Packs. This has already been very successful for us this year and we'll continue to shift things in this direction while still offering high quality limited beers in bombers.

KB: You also work at Threadless, another crowdsourced art related venture, with ties to the craft beer scene. For those that don’t know, can you give us a quick description of Threadless? What is your job there?

LC: Threadless started in 2000 as an ongoing tshirt design challenge where anyone could submit designs and have them voted on by the Threadless community. The top scoring designs when then be printed on shirts or other products. This grew to a community of over 2 million and over 600 design submissions a week. I started in 2005 and was the warehouse director and comic book czar managing fulfillment and shipping to over 150 countries. In that time, I also started projects such as Comics-On Tees that were original comics across 4 shirts, art curator for the space, and events coordinator. Threadless has always been an inspiring place to work for that allows you to pursue dreams and projects outside your job title. Last year we started a new project called Artist Shops where we are allowing artists to setup shops with Threadless where we handle all the manufacturing, fulfillment, and shipping on the artists behalf for a base fee on each product sold. So far we've had over 35,000 signs ups for Artist Shops and my job title is now Artist Shops Account Director handling VIP shops. I also curate art for places like Soho House and the DMK Restuarants on behalf of Threadless. I also do operations consulting on the side for businesses.

KB: You just launched a new project called Secret Panel. Can you tell us what it is?

LC: This was a fun project started with Delicious Design League who also does the packaging and web design for Arcade. We wanted to do Mondo style high quality limited edition prints for more creator owned / indie comics and video games. We felt there were so many great titles that deserved this treatment and it's been really fun to work with talent print and comic artist and properties.