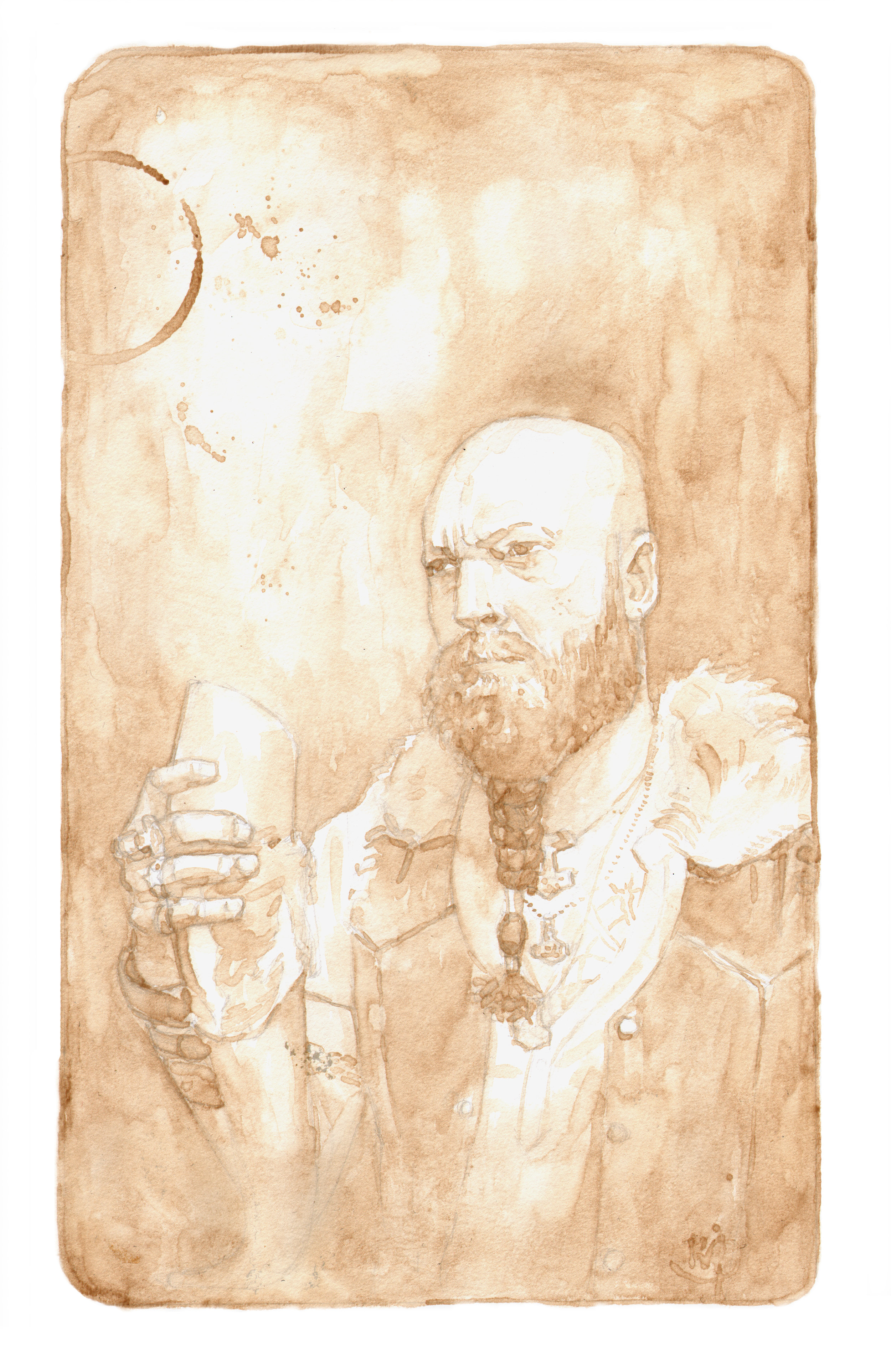 Labor Day weekend of 2012 is one of those moments in my life that is frozen in amber as a beloved memory. My wife and I journeyed to the Upper Peninsula for the wedding of dear friends, which was to take place at a secluded beach house on the southern shore of Lake Superior. I had never been that far north and was excited to explore Copper Country for the first time.

I could reminisce forever about that wonderful week, but this interview isn’t about me.  This interview is about Doug "The Beerbarian" Bailey, a loud, intense, and oddly charismatic modern day Viking I met that weekend, and with whom I struck up an immediate friendship.

Late one afternoon I was having a beer with a fellow wedding guest on the back porch of the house on the beach. We talked about art, comic books, writing, photography, and booze. She mentioned that her husband worked for a brewery in Montana and a few moments later a big guy--bald, bearded and wearing a kilt--came bounding up the back steps to join our conversation with booming gusto. Over the next several days we had a plethora of strange and interesting conversations that ranged from brewing mead to hunting to favorite comics books, from to Norse mythology to cooking, and on and on it went.

Doug and I have stayed in touch over the intervening years since then. We keep an eye on each other via Facebook and still manage to have frequent nerdy conversations on just about everything. During a recent visit to Chicago we reconnected in person, and Doug was kind enough to let me interview him and paint his portrait.

(Note that all of the answers below were written while Doug was drinking mead and cooking an entire goat in a pit.)


KB: We should start with your name, The Beerbarian. Where did that name come from and what does it mean?

DB: Ha! Well, when I first started working at Red Lodge Ales, Lindsey, the founder's wife, had been the only brewery rep before me. She was called the Director of Good Times. Justin, the Brewmaster was called the Squeegee Master, and everyone else had creative job titles. Lindsey asked what I should be called and threw out Road Warrior and Beerbarian because of my dress and beard style. Since the beer portrait doesn't show it, I wear a Utility Kilt year round (yes, even in Montana winter) and I'm a bit of a modern day Viking. That's how it started, and it kind of took on a life of its own because I'm quite loud when hosting beer events and the like. At the end of the day, it's just me being who I am most comfortable being, and it has worked out pretty well so far. I get people all the time that I run into in MT, and even out of state or in airports that will ask me..."Are you the Beerbarian?" It always gives me a chuckle.

KB: If anyone takes a look at your Instagram or Facebook page they’ll see that you clearly have an affinity for handcrafted clothing, jewelry, weaponry, beer and food. Where did this love come from?

DB: Yeah, I love passionate people. People who find something that they love and they take a chance and run with it. It takes a lot of guts to step out and do your own thing, put all your eggs in one basket and fight for that basket! I think it comes from secretly being a huge nerd. I have loved comic books (Marvel not DC, haha!) Dungeons & Dragons, Conan, Vikings, mythology, and all that stuff since I was really young. I'm fortunate that I'm 6'1" 205lbs and I can dress and do what I want now and no one gives me any crap for it. When I was younger that wasn't the case and it's not the case for a lot of people. So I enjoy being a sort of emissary for acceptance. I love to hunt and fish and fight, but I also play D&D weekly with a bunch of guys from Bridger Brewing Co, and still love comics. Hand crafted things generally have more love behind them, so that leads to higher quality and better flavor. It's probably made by someone who is a "nerd" about whatever they are making, and that's awesome. I love supporting those people, and I love changing the minds of people who might think that someone is "weird" for being passionate about their craft, whatever it may be.

KB: The first time I met you was at a friend’s wedding in the Upper Peninsula. You showed up with a suitcase full of handmade sausages that were insanely delicious. How did you get into making sausage and what are some of the other culinary things you’ve been dabbling with?

DB: Those sausages were actually made by my buddy, Kevin at 4th Ave Meats in Billings, MT. I am actually at his house right now throwing axes and roasting a goat...but I digress. We collaborated on those, me being the beer side, him being the butcher. I've made some other collaborations with him, and he kicks ass. As I said before, I love handcrafted things, and I love to cook, and I'm not afraid to try new or in many cases very old techniques. It comes from my affinity for history and my heritage. I like fermenting vegetables, making kombucha, curing meat, butchering and processing my animals from hunting, brewing mead, and all kinds of fun cooking techniques! I have really gotten into cooking whole animals. Low and slow, whole birds, hogs, goats, whatever I can get my hands on.

KB: You recently made the move from Red Lodge Ales to working for Cardinal Distributing. How has your job changed, and what have you learned from the move?

DB: When I was with Red Lodge Ales, I was traveling all over MT, ND, and WY hosting events, beer dinners, beer tastings, pint nights, Oktoberfests, and all kinds of other fun stuff throughout my territory. I was living in Red Lodge at the time, but not actually managing the sales in the Red Lodge area, so it meant a lot of windshield time. My family and I moved to Bozeman, MT late Sept 2015 because it was my largest market and a bit more central to the state compared to Red Lodge. My distributor there, Cardinal, was selling nearly 40% of all the beer being produced at the brewery, so it made sense for me to be located there. In April, Cardinal offered me a position to manage sales for their Craft Beer department and Pabst Blue Ribbon. I know the PBR part sounds kind of funny, but Pabst is a really, really awesome brewery to work with. They love being the "Craft Beer Wingman" beer. It's the cheap light beer that lots of craft beer people go to when they need...well...cheap light lager. HA! So I'm not on the road nearly as much, I am managing sales for nearly 30 breweries, many of which are in Montanan including Red Lodge Ales, in the Greater Gallatin Valley and Yellowstone area, and working with a much larger corporation like Pabst, which is quite different. I also have a sales team of 12 guys I help manage. Distributors are the middlemen. Beer drinkers often don't consider how their favorite beer gets from their favorite brewery to their eager taste buds...there are a lot of people who have to get that brew from Point A to Point B. Trucks, warehouses, sales teams, delivery guys, shelf stockers...it's quite a complicated industry, but it's a hell of a lot of fun!

KB: What can you tell us about the craft beer scene in Montana? What’s new and exciting there?

DB: The craft beer scene in Montana is amazing! We have barely a million people in the 4th largest state in the country, and we have over 80 breweries and more than 20 distilleries! Bayern Brewing has been going since the 80s, and we've got more than a few that are 20+ years old, so Montana beer is not just new "Hipster Craft Beer." It's been around a long time, and it's crushing it. Scottish ale is uniquely popular here and IPAs are all the rage just like everywhere else. We also have a few breweries that have great sour ale programs, barrel aged beers, and some unique Montana ales like huckleberry and prickly pear. Bozeman is a great town to visit and get an awesome Montana beer experience; we have 8 breweries here and 4 distilleries!

KB: You’ve been getting into brewing meads lately. How are you finding that process vs., making beer? Any plans on turning it into a business or is it just for fun right now?

DB: I brewed my first mead 12 years ago. I had never had a mead before, but I read about it in Beowulf and always wondered what it was like. My first mead was made with "Squeezy Bear" style honey and bread yeast. I liked it, so I started refining it. These days, I've really turned the mead brewing up to 11. I'm making mead a little different than what you might find commercially, and once again I’m not afraid to experiment. The great thing about being a mazer is how rustic the process is. There is also very little waste with mead. No spent grain or grape pulp...the honey and water turn into awesome! I'm drinking some of my rhubarb meadfrom a water buffalo horn right now, and it's really hitting the spot. I've made mead with coffee beans, chili peppers, pumpkin, hops, lavender, choke cherries, all kinds of stuff! And I'm just getting started! I'd love to have my own mead hall one day, a place where you can gnaw on a joint of boar or a turkey leg and some cheese, throw some axes, and drink from a horn...yeah...it's been a goal since that very first batch.

KB: This is a broad question but what does “craft” meant to you?

DB: That is a broad question. If I'm not careful, I'll digress into a "Zen and the Art of Motorcycle Maintenance" tirade thinking about this. HA! Craft can apply to almost anything, but I will just stick to beer. There's the technical definition as given by the Brewer's Association, which puts the label of Craft Beer on breweries under 6 million barrels per year. Funny how that number keeps growing...HA! Some beer nerds out there will say that breweries like Sam Adams and some of the other big breweries are not Craft anymore, but if you're being innovative, and you're making good high quality brew with quality ingredients, that's craft beer. You could argue that the really big breweries are really good at their craft of making the same beer over and over again...but the process is little more than manufacturing anymore in my opinion. "Brewed the Hard Way" has got to be one of the most ridiculous commercials I've seen in a long time. HA! Craft can be lots of things, but I believe that being creative, and trying new things to bring exciting beers to eager consumers is the name of the game. Changing with the tastes of a rapidly evolving beer scene in the US is vital to being a Craft brewery. Trying to push the same ole stuff down people's throats when more and more drinkers are obviously looking for new and exciting things isn't where the beer scene seems to be headed, and I don't see that changing any time soon.

For more info about Doug, please see the links below.