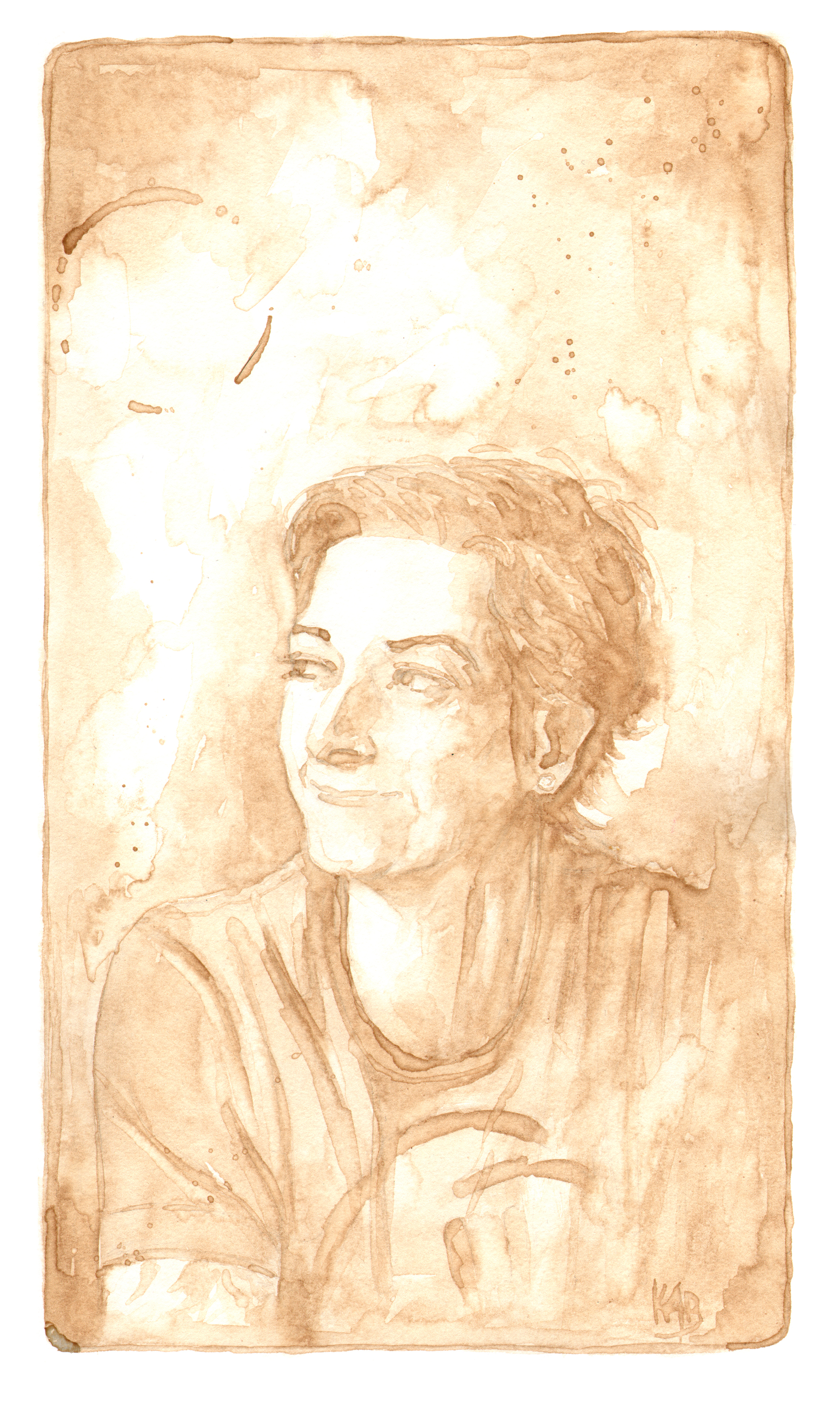 When I first met Northdown Cafe and Taproom owner, Kate Gallagher, she was sitting on the customer side of the bar, carrying on a pretty animated discussion about sours. Kate loves to talk about, and drink, craft beer. Her bar, which she owns with her husband Tom, quickly became a favorite place for me to take friends when they wanted to try something new on the North Side. Their menu is fantastic and their beer list is always exciting.

When I started beerportraits.com, Kate was one of the first people on my list to interview. Kate was kind enough to take some time to sit down for an interview, and also suffer through me taking some photos of her to paint from (she hates having her photo taken).

KB: Let’s start with your path to opening Northdown Cafe and Taproom. You went from being a veterinary technician to opening a bar. What inspired your change in careers and how different is your life now? What were some of the things you learned as you made the jump into being a bar owner?

KG: Being a vet tech is an incredibly rewarding, challenging and difficult job. I did it for several years, with the last eight of them being at an emergency facility. Emergency medicine really…amplifies everything. You’re constantly on, constantly stressed. You are with people on what is, sometimes, one of the worst days they’ll have. It’s easy to burn out under these circumstances, which I did. I’ve always cared more for most four-legged’s than those with two, so helping them in a hospital setting was both the best and worst job for me…It’s hard to not grow attached to your patients, especially when they’re cats and dogs.

My husband/business partner, Tom Lee, was opening Northdown around the time that I wanted to leave the ER, and I’ve worked in bars off and on since I was 16, so going back to the field wasn’t that great of a change. I’d managed a staff of over 50 at the hospital, so I figured managing a bar couldn’t be that different. I was totally wrong! Many people in the hospitality industry do it only for money, not because of a desire to have their customers leave happy, satisfied and wanting to return. This was night and day to me – vet techs are driven by loving their jobs, and usually make shit for money. It has taken a long time to find people that want to bartend, wait tables, cook, etc. because they genuinely like it and know the money will reflect their enjoyment. Those are the people you need on your team, those are the people that you can build a business with.

What have I learned? A ton about beer. To trust my gut when it comes to my instincts on people. To do business with and support people that you like and respect. That no one will ever care about your business nearly as much as you do. That regulars are amazing -- beer is a great conversation starter, and most people have great stories to tell.

KB: Northdown has a creative menu with some fantastic twists on the usual bar fare. Where does the inspiration come from to create such an interesting menu?

Honestly, the menu reflects what we like to eat, along with input from the staff.  Before we opened the bar, whenever we’d go out it was often a pain in the ass – I’m a vegetarian (and have been since I was 18), and Tom is not, so it’s hard to find a place that we can both eat and drink happily. That was one of the driving factors for our menu: to have a place that someone can get a great vegan meal and their fellow diner can get a burger, all while drinking beers they both enjoy.

The staff is great in letting us know about things people request frequently, or modifications out of the ordinary that they come up with. Sometimes the ideas are run as specials, and sometimes they make it on the menu.

KB: The beer menu at Northdown showcases a lot of breweries that don't often get tap space in Chicago.  What are some of your favorite beers that maybe people haven't tried, but should?

KG: Augustiner Edelstoff: It’s perfect. Light, astoundingly drinkable, and they’ve been making it since forever, so it’s gotta be good!
Boon Oude Geuze Mariage Parfait: An amazing sour. It’s a great example of the style, simple and balanced. Sours are my personal go-to beer, even though they took me a while to get into. I now love turning people on to sours, and this is a great one to do that with. It’s super affordable as far as sours go, so I feel confident selling it. There’s nothing worse than someone being sold a $30+ bottle of sour beer only to find they hate it. They get pissed about the money, and honestly, a good sour is rare – why waste it on someone that doesn’t even know if they like them?
Upright Brewing: Anything from them.
Lion Stout: It’s a stout, made in Sri Lanka, supposedly on the side of a mountain. It’s awesome.

KG: Every year we host “Lions, Tigers and Beers” (LTB) on the second Friday in June. It benefits The Wildcat Sanctuary (TWS) in MN, which we first found out about from Linda and Todd Haug from Surly Brewing. We met them shorty before we opened Northdown, when Todd was at 3 Floyds brewing a beer. Nick Floyd introduced us, and we all immediately started nerding out about our cats, and just the badassery of cats in general. And while I didn’t want to work emergency medicine anymore, I did still want to make an impact in the lives of animals, and not just ours. So after hearing about TWS, I checked them out and wanted to do something for them. I contacted them via email, introducing us and asking if we could host a fundraiser for them. At first they were a bit thrown – here’s a couple of people they don’t know, in a city 8+ hours away from them, wanting to throw a beer party for cats. They did their due diligence on us, which I really liked. TWS is, above all else, looking out the best interest of the cats. They wanted to make sure that what were wanted to do would follow their mission and support their philosophies, and we continue to work closely with them to ensure that we do.

LTB is a blast – we tap new kegs every 2 hours, starting at 11 AM and going until 2 AM. The event is co-sponsored by our favorite breweries/friends: 3 Floyds, Mikkeller, Surly, Firestone Walker, Off Color, Perennial and Side Project. On top of that killer line-up, we have beer from another 50+ breweries, most of whom are people we’ve met and worked with before.
And in addition to the beer, we have raffle items that are donated from shops and artists from all over. There’s a young lady in RVA whom I’ve never met that’s donating art! There are shops that have donated every year, and there are people that spend the entire event, open to close, volunteering that day. The founder of TWS and a couple of the board members will be here this year. It’s overwhelming really, how much help and support LTB gets.

Again, one of the best things we’ve learned to do is work with people you know and like – it makes all the difference in the world, especially when you’re trying to throw a party that raises $10k+ for a big cat sanctuary!

We also did an event for Safe Humane Chicago last year, and we’re planning another event for this October with a charity that also focuses on bully breed rescue. I won’t go off on my pit bull rant, I’ll just say this: you either get pitties or you don’t. And if you don’t, you just haven’t met the right one yet!

Our charity events are all about rescuing animals because it’s the right thing to do. They rescue you back, as cheesy as that sounds. You can have just the shittiest day ever, and when you get home, your furry family makes it all fade away. They have no concept of day-to-day life trials and tribulations, the cats still need to be fed and worshiped and the dogs still need you to love them.

Back even before I worked with animals, I worked at an art gallery on Michigan Ave here in Chicago. So I guess I’ve always worked jobs that revolve around something I enjoy: the art gallery appealed to my art background and schooling, the veterinary field allowed me to help animals, and the bar allows me to give people somewhere to relax and have a good time!

KB: One of the hidden features of Northdown is a rotating art show that hangs in the back room area. What made you decide to start showing art in the bar? Where do you find artists?

KG: We have a lot of talented friends, and we have space for them to show off, so it only makes sense! Art shows bring in people that maybe haven’t been in before, that maybe don’t know a ton about beer. So we get to introduce them to us and they get to enjoy their friend or favorite artist's work. We always pair the events with a brewery or distillery so the openings are a blast.
We just did a show with an amazing and talented young lady, Raeleen Kao, who is going to start curating the shows for us. We’re excited to have her take the helm and introduce our patrons to new artists!

KB: You’re also a writer for CRAFT, an online magazine focused on craft beer. Can you tell me a little bit about Craft and what you do for them?

KG: I think the best way to describe CRAFT is that it’s all about things that people create because they’d go batshit not doing so. It’s about the things people do that get them out of bed in the morning and wear them to exhaustion daily, it’s about things that people love so much they make a living out of doing them because there’s nothing else they’d rather do. So each issue will have articles about people that are farming, making cheese, brewing beer, distilling, or forging knives – it’s awesome!
My column features artists that create beer labels. The format is a 20 Questions interview, mostly because I’ve always really liked the quick and dirty interviews in magazines. Short reads, random info, and a lot of fun.

KB: This is a pretty broad question but what does art mean to you?

KG: Art is something that invokes emotion. Whether you love it or hate it, if it gets a rise out of you, that’s art. I’m not going to name my favorites because I think art is too personal and too political almost, but I’m the person that laughs aloud while reading on the El, that sings while walking to work, that cries in the middle of a museum, and that walks out of a terrible movie. But hey, even that terrible movie is art!

You can find out more about all the things happening at Northdown in the links below.